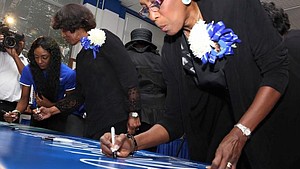 NASHVILLE – The women Ed Temple helped become Olympic medalists say the legendary track and field coach was a “father figure” who motivated them to be successful outside the sport.

Coach Temple died Sept. 22 at the age of 89. A memorial service was held Sept. 30 in TSU’s Kean Hall, and many of Temple’s famed Tigerbelles attended.

One of them was former Tigerbelle Chandra Cheeseborough-Guice, who inherited the title of TSU track coach from Temple. She made Olympic history at the 1984 Los Angeles Games when she ran a leg on two gold-medal relay teams and was the silver medalist in the 400 meters.

She recalled Temple calling her after he retired in 1994 and urging her to take the job. She didn’t say no.

“I got the job and 22 years later, I’m still here at Tennessee State,” said Cheeseborough-Guice, adding that she considered Temple to be a “father figure, and a man of truth and wisdom.”

“I’m blessed that he entrusted me with this program, to keep the legacy going,” she said.

Temple led the Tigerbelles to 23 Olympic medals. In all, of the 40 athletes he trained and sent to the Olympics, 100 percent of them received college degrees.

“This speaks to his greatness and impact,” said TSU President Glenda Glover. “Tennessee State will always remember Ed Temple, the man and the coach.”

Coach Temple’s daughter, Edwina, said about 85 percent of those 40 Olympians have more than one degree, and roughly 10 percent have doctorates.

Former Tigerbelle and two-time Olympic medalist Madeline Manning Mims said it was Temple who encouraged her to get her doctorate.

Former Tigerbelle Edith McGuire Duvall said she appreciated the fact that Temple wanted his athletes to perform just as good, or better, in the classroom.

“He impressed upon me to finish school,” said the Olympic gold medalist, adding that she lost her father a year before she started at TSU, and that Temple was someone she turned to for advice. “This man treated us all like his kids. We were there to run track, but also to get an education.”

Olympic bronze medalist Margaret Matthews Wilburn, a retired Memphis principal, said her experience with Temple as a Tigerbelle helped her be successful in the workforce.

Current Tigerbelle Amber Hughes said that even though she didn’t train under Temple, she feels fortunate to be coached by someone who did.

“Just to know that he is the one who brought my coach here, and that I’m now under the coaching of who he coached and brought up,” Hughes said. “He was a great man.”

Coach Temple’s legacy is now on display as exhibits in the Smithsonian Institution’s new National Museum of African American History and Culture in Washington, D.C. The TSU collection includes Temple’s Olympic jacket, replicas of gold medals won by the Tigerbelles, and other artifacts or memorabilia.