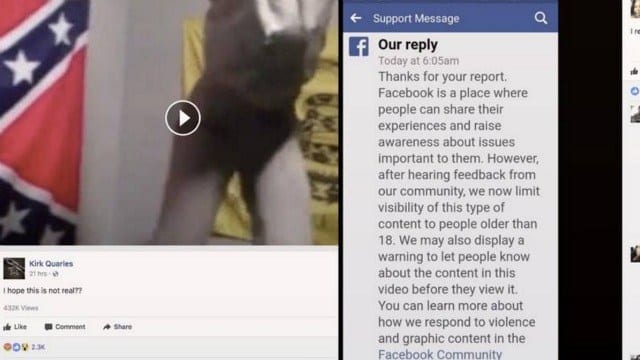 On Friday, a video of a black woman being lynched by a white man in a tee shirt bearing the Confederate battle flag went viral on Facebook.

According to Mic, users who flagged the video asking for it to be taken down were disappointed when Facebook instead simply marked the content as ‘adult’ and made it visible only to users who are above the age of eighteen.

“Facebook is a place where people can share their experiences and raise awareness about issues important to them. However, after hearing feedback from our community, we now limit visibility of this type of content to people older than 18,” Facebook said in response to people flagging the video.

The video, which by late Friday morning had been viewed over 432,000 times, has also been shared over 14,000 times and drew more than 8,700 comments. The user who originally posted it uploaded the video along with the caption, “I hope this is not real??”

The clip, which is graphic, shows a black woman kneeling who appears to be either drugged or intoxicated. Two white men tighten a noose around her neck, and the video then cuts to a man who is pulling on the rope while the woman gasps for air. The video is cut in such a way that it is not possible to see the face of the white man holding the rope. The woman’s body goes limp as the clip ends.

Eventually, by Friday afternoon, the clip was pulled from the site.