By Maya Rockeymoore, Ph.D., The Root 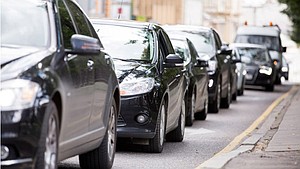 Driving while black in America has always been fraught with peril. During the Jim Crow era, African Americans traveled the highways by night to avoid harassment by law enforcement and packed extra fuel and food because they could not stop at gas stations and restaurants that served only whites.

Today, encounters with police that are supposed to be harmless, such as stops for broken taillights or speeding, are cause for intense fear given the number of videos that have surfaced showing African Americans dying at the hands of law enforcement in such situations.

Now comes the news that driving while black may soon be a thing of the past. For several years, technology firms and auto companies have been testing driverless-car technology with the intention of placing such vehicles on the road in less than a decade. At first blush, this type of technology may seem like a solution to one of the great civil rights challenges of our time. African Americans might ask: “If I’m not driving, then they can’t stop me, right?”

Yet the advent of fully autonomous vehicles brings a different set of concerns for African Americans, particularly those who make their living driving delivery and heavy trucks, buses, taxis and chauffeured cars.

Curious about how autonomous vehicles might affect U.S. workers, my organization, the Center for Global Policy Solutions, conducted a recently released study: “Stick Shift: Autonomous Vehicles, Driving Jobs, and the Future of Work.”

We found that whites make up the largest number of our nation’s drivers and would be especially vulnerable to job loss in the event of a rapid transition to autonomous-vehicle technology. Nevertheless, with 4.23 percent of black workers employed in driving jobs, compared with 2.85 percent of all workers in these jobs, blacks rely on driving jobs more than any other racial or ethnic group and would lose a greater-than-average share of jobs under conditions of rapid automation.

Additionally, African Americans would lose relatively good-paying jobs if driving occupations were rapidly automated, since black drivers receive a “driving premium” from these jobs, earning a median annual wage that is $2,500 more than they earn in nondriving jobs.

Blacks living in certain Midwestern and Southern states would also experience increased vulnerabilities. Although states like California, Texas, New York and Florida have the largest number of workers in driving jobs, Mississippi, Wyoming, West Virginia, North Dakota, Iowa, Indiana and Arkansas are among those states that would be disproportionately harmed, primarily because workers in these states are both overrepresented in the driving industry and earn a wage premium from driving jobs.

Although men of all races and ethnicities dominate all categories of driving jobs and receive much higher wages (earning 64 percent more than women) across these positions, it’s worth noting that bus-driver positions employ the greatest number of women and that the number of black female bus drivers (70,000) comes “close” to reaching numerical parity with black male bus drivers (86,000), even though they are still paid less—earning an annual median wage of $22,000 versus $32,000 for black men—for doing the same job. Understanding how black women would fare is important given the percentage of black women who are the heads of household and primary breadwinners.

So while a rapid shift to autonomous vehicles may have net positive impact on civil liberties for African Americans, the resulting job loss would have a disproportionately negative economic impact on black workers, families and communities.

In light of this possibility, it will be important for black voters and organizations to advocate for a stronger social safety net that includes easy access to quality retraining programs, apprenticeships and affordable postsecondary-education opportunities that can align their skills with available jobs or entrepreneurship programs that can actually spur the creation of sustainable businesses.

Expanding important social-insurance programs like Medicaid, unemployment insurance and Social Security will also be vital for preventing undue hardship on displaced workers and their families. Indeed, if moderate to liberal estimates of projected job losses are likely (a very plausible assessment, given data from technology corporations themselves), Social Security should be expanded to accommodate a progressive basic income program. A PBI would ensure workers against the risk of automation-triggered job loss and be progressively scaled to correspond to estimates of the worker’s pre-job-loss income in an effort to protect low-income households from economic insecurity. The PBI would augment, not replace, Social Security’s existing benefits framework for retirees, the disabled and the survivors of deceased workers.

In sum, African Americans have a significant stake in the automation debate and its likely impact on the future of work in America. Given that experts predict sizable job losses (pdf) from automation in industries beyond driving jobs, it will be important for black communities to understand and prepare for the possibility of coming labor market disruptions.