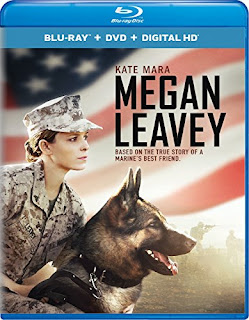 Wounded Vet Reunites with Combat K9 Partner in Postwar Docudrama
Five years ago, Mike Dowling published “Sergeant Rex,” a memoir about the unbreakable bond he’d forged with a bomb-sniffing dog while conducting over 35 missions on the front lines of Iraq. Now, another Marine, Corporal Megan Leavey, is the subject of a docudrama “based on a true story” chronicling her suspiciously-similar relationship with the very same German shepherd.
Directed by Gabriela Cowperthwaite, the film stars Kate Mara as the title character, with veteran thespians Edie Falco and Will Patton in support roles. At the point of departure, we find the rudderless protagonist enlisting in the service more out of a lack of direction than a sense of patriotism.
But after completing basic training on Parris Island, she finally finds her true calling upon being assigned to the K-9 unit. Uncontrollable Rex is on the verge of being declared unfit for active duty by the base’s impatient veterinarian, Dr. Turbeville (Geraldine James), when an intrepid dog whisperer begs for an opportunity to soothe the savage beast with a little TLC.
Drill Sergeant Martin (Common) intervenes on her and the hound’s behalf. Then, exhibiting the patience of Job, Megan is the first soldier with the tender touch necessary to tame Rex. The two soon become inseparable and, the next thing you know, they’re shipped overseas to search for IEDs buried in the dangerous desert sands of Iraq’s Anbar Province.
The deployment initially proves uneventful other than Megan’s crossing paths with potential love interest, Corporal Matt Morales (Ramon Rodriguez). Too bad he likes the Mets while she’s a rabid Yankees fan.
Unfortunately, before love has a chance to blossom, Megan and Rex are injured in a blast and shipped back to the States for rehab at facilities far apart from each other. By then, Megan’s already developed an attachment to the hound that’s almost illegal. She’s convinced Rex belongs to her, not to the U.S. Military. So, she spends the rest of the picture cutting through bureaucratic red tape ’til their tearful reunion. Aww!

Pat and predictable, yet a sentimental enough journey to leave you weepy in spite of yourself.

To see a trailer for Megan Leavey, visit: https://www.youtube.com/watch?v=IGGcFbW__XI

To order a copy of the Megan Leavey Blu-ray/DVD Combo Pack, visit: